To Whom It May Concern,

On behalf of the Khmer-Krom families in Soc Trang Province, we would like to urgently appeal and notify you of the unfair trials of two Khmer-Krom monks and six followers who face 10 months to 6 years for exercising their freedom of speech, opinion and association.

On the 25th of September, 2013 in Prey Chop Commune, Lai Hoa Village, Vinh Chau District, Soc Trang Province, four Khmer-Krom people were sentenced for up to a year for creating “Public Disorder”. 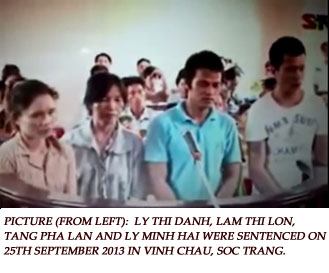 The four were simply exercising their basic freedom of speech in rallying their support of Venerable Ly Chanh Da, who was defrocked twice and humiliated in front of television for wanting to create Khmer classes at his temple on May 16th, 2013. They were in turn, punished and imprisoned.  Venerable Ly Chanh Da has since fled to Thailand to seek asylum.

On 27th September, 2013 in Tra Set Commune, Vinh Hai Village, Vinh Chau District, Soc Trang Province, Venerable Thach Thuol, born in 1985, was sentenced to six years in prison for contacting outside organizations to speak about the human rights situation back in

Kampuchea-Krom and escaping abroad to against Vietnam. Abbot Venerable Lieu Ny, born in 1986 was sentenced to 4 years prison for not following orders from the Patriotic United Buddhist Association to defrock Venerable Thach Thuol. In the video testimony entitled Khmer-Krom Practicing Theravada Buddhism in Fear, Venerable Lieu Ny refused to defrock Thach Thuol because he did not violate any Buddhist principles.  Thach Phum Rich, born in 1989 and Tra Quanh Tha, born in 1978 were sentenced to 3 years and 2 years respectively for helping the two monks flee after they became fearful of their safety.

We are deeply concerned about the transparency and unfair trials of these Khmer-Krom individuals.  The charge of “Public Disorder” for the Khmer-Krom victims in Prey Chop, remains a powerful tool in which Vietnam authorities use for political prosecution and silencing of dissents.

There were no legal representations for any of the Khmer-Krom victims and Venerable Thach Thuol faces six years in prison for admitting that he just did human rights work.

On behalf of these voiceless victims, we urgently need for your assistance to: