Vinh Chau, Soc Trang, 26th September 2013 – Four Khmer Krom people were trialed on 25th September 2013  have been handed a one year sentence for speaking up on behalf of Abbot Ly Chanh Da, who has fled to Thailand seeking asylum. 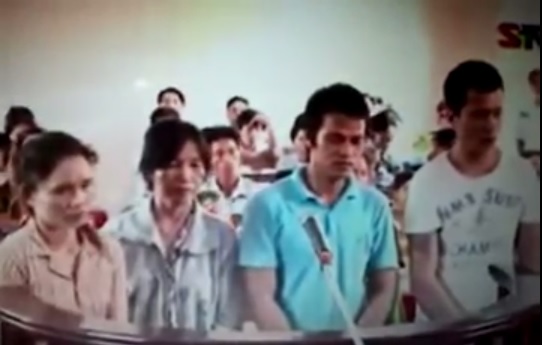 Accused of creating “Public disorder”, Lam Thi lon, Ly Thi Danh, Ly Minh Hai and Tang Pha Lan was simply exercising their right to speak  and standing up for what they thought was right  but have been instead treated as criminals.

The Khmer Krom people had no legal representation or lawyer present to represent their side of the story. Instead they were most likely to coerce into the submission of guilty plea deal as a means of getting a lighter sentence.

One year may seem like a light and fair sentence based on the fact that the accused gave “honest confession, are of ethnic Khmer with low education, limited legal awareness”* but in actually fact is a heavy sentence for the four accused.

One year in prison means a year of isolation and torture for “beating a drum to alert local villagers that Vietnam authorities were defrocking one of the monks at Prey Chop temple”. Instead of being called to the police station and given a warning and or fine, the individuals were arrested and imprisoned, given an unfair trial and sentenced to one year.

News from the Villagers from Prey Chop revealed sixteen others have been fined $60 for participating in the so called” Public Disorder” incident.

According to inside news from Ta Sek temple, a lawyer hired by the family of one of the accused was told via a Vietnamese police officer that the Venerable Lieu Ny, Venerable Thach Thuol, Thach Phum Rich, and Thach Tha refused to use the lawyer.The lawyer did not even have a chance to see or speaker directly with the accused.

It is yet another example of a legal system that remains unfair and discriminates against the Khmer Krom. The charge of “Public Disorder” remains a powerful tool in which Vietnam authorities use for political prosecution and silencing of dissents.