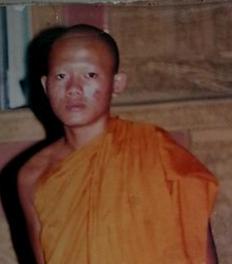 According to a Khmer-Krom woman in Prey Chop commune, she told VOKK Internet Radio (vokk.net) that the villagers went to the local police station in Prey Chop commune and saw Ven. Ly Chanh Da was thrown outside of the Police station unconscious. He was wearing a T-shirt and a short pant. The villagers took him back to one of the villagers’ house, helped to make him to become conscious, and dressed him up with the Buddhist rope. When he was awake, he could barely talk and told the villagers that he was tortured and injected two shots under his arms, then he felt unconscious.

There are many polices are now in the Prey Chop temple. The Vietnamese Authority does not allow Ven. Ly Chanh Da to go back to his temple. He is staying at the villager’s house now. He is in a very bad health condition. Sometime he cannot even remember his own name.

Mrs. Lam Thi Xang Lan and Mrs. Ly Thi Danh were arrested at their home and taken to imprison in Soc Trang province. Mrs. Ly Thi Sa Bon was summoned, arrested, and imprisoned at the prison of Vinh Chau district, Soc Trang province. The Vietnamese authority arrested the above three Khmer-Krom women because they supported Venerable Ly Chanh Da. They do not want Vietnamese authority to defrock Ven. Ly Chanh Da because he does not violate any Buddhist rules.

On behalf of the voiceless Khmer-Krom in Prey Chop commune, we would like to urge the foreign embassies in Vietnam and civil societies around the world to urgently request Vietnam to: