On February 5, 2014, the Khmer and Khmer-Krom around the world, especially in Europe, under the leadership of KKF Chairman, Mr. Thach Vien and KKF President, Mr. Thach Ngoc Thach, protested in front of the United Nations in Geneva to voice their concerns regarding to the human rights violations committed by the Vietnamese government against the Indigenous Khmer-Krom Peoples. 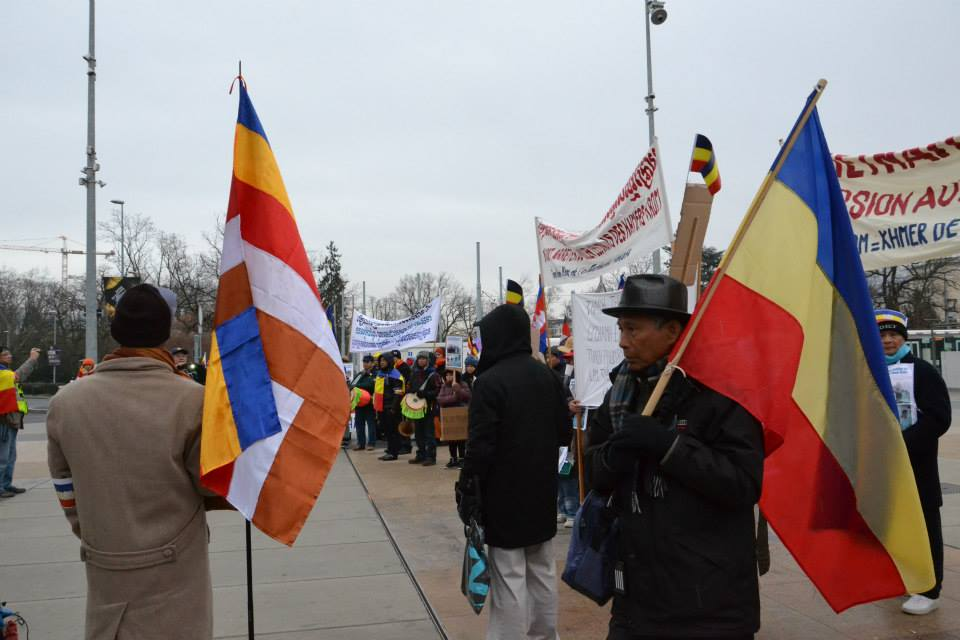 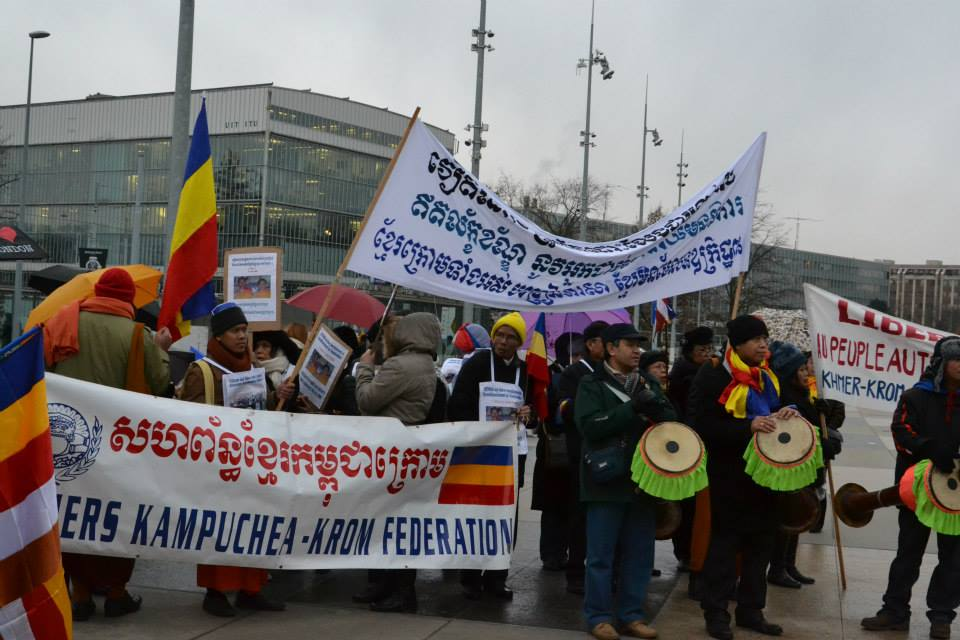 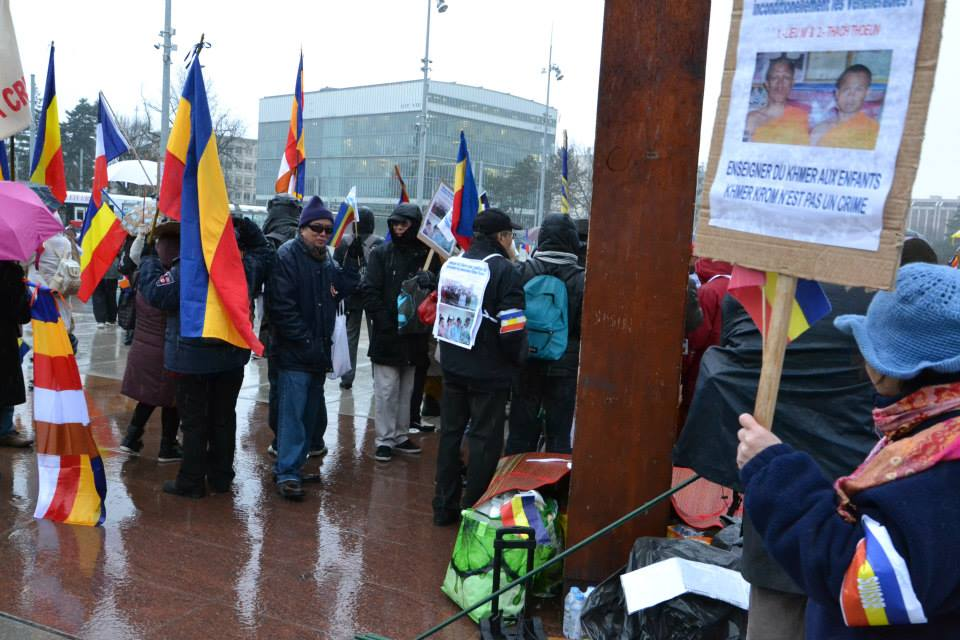 Started from 2:30 PM, the same day, the United Nations Human Rights Council examined Vietnam for Second  UPR cycle. Just like in the first cycle from 2009, Vietnam brought the whole team of 23 representatives, led by the Deputy Minister of Foreign affair, Mr. Ha Kim Ngoc, to defend its human rights record.

The troikas to facilitate Vietnam’s UPR this year are Costa Rica, Kazakhstan and Kenya. More than a hundred countries attended the review – almost doubling the amount of countries that reviewed Vietnam during the first cycle.

People around the world, especially the human rights activists who are concern about the violations in Vietnam that could not travel to Geneva was able to watch the UN WebCast live from Geneva.

The original date for Vietnam’s UPR was January 28, 2014, but Vietnam exchanged the date with Cambodia, citing reasons that their delegations wished to celebrate their New Year – though human rights activists saw it differently, characterizing the date change instead as tactical, intent on disrupting the traveling schedule of the people who had planned a protest in Geneva to coincide with the original review date.

KKF was well prepared for these changes and had submitted a 5 page statement towards the review in addition to a 7 page list of questions and recommendations given to States that participated in the Vietnam review.  Dr. Cooper, KKF Advisor, travelled to Geneva a week before the review to help in lobbying the States.  While in Geneva, Dr. Cooper organized a side event on January 28 that presented the issues and violations which the voiceless Khmer-Krom people in Kampuchea-Krom are facing. Mr. Chau Serey and Ms. Kien Sothy called into the side event via Google Hangout.  Mr. Chau Serey gave an overview of the KKF’s questions and recommendations for the States and Ms. Kien Sothy talked to the role that Khmer-Krom youths abroad played in advocating for the fundamental rights of the Khmer-Krom living in their ancestral land, Kampuchea-Krom.

Prior toVietnam’s review, human rights activists had already read Vietnam’s national report before the UN Human Rights council. As so, they were not surprise to hear the Vietnamese delegate, Mr. Ha reading something like:  “In Vietnam , the freedoms of information, speech and expression are enshrined in the Constitution and various relevant laws, ensured in practice by State agencies, and encouraged by the diverse emergence of the press and mass media, including the Internet. The voice and aspiration of the people are always listened to and taken seriously during the formulation of laws and policies on every key issue of the country.” during this review.

After listening to the glossy report from Mr. Ha, reading line by line to burn the review time, many diplomats attending the review also started giving recommendations. Many expressed their concern about restrictions on freedom of expression and religion, formation of independent trade unions, and about harassment of unregistered churches.  The US diplomat urged Vietnam to release all Prisoners of Conscience.

It was pitiful to watch Vietnam’s delegates answering the questions from the international diplomats. The answers were not genuine, many times they pretend to answer to questions asked by different country by calling the name of the country but then went directly into prepared statement made by the government which were completely unrelated to the question. Rather than choosing to be cooperative and receptive, they choose to make a mockery of the review process and the countries who participated in this review.  The delegate’s strategies to kill time so they can get away with the review did not work so well as 106 diplomats took to the mic and made statements which totaled over 227 recommendations, even doubling the first cycle.

Starting January 1, 2014, Vietnam became an official member of the UN Human Rights Council for the term 2014-2016. Vietnam will not have an easy pass with its human rights violation record, so it is time the country to seriously begin accepting the recommendations and implementing them so that the people in Vietnam could fully enjoy their fundamental rights as enshrined in the International Laws that Vietnam ratified. 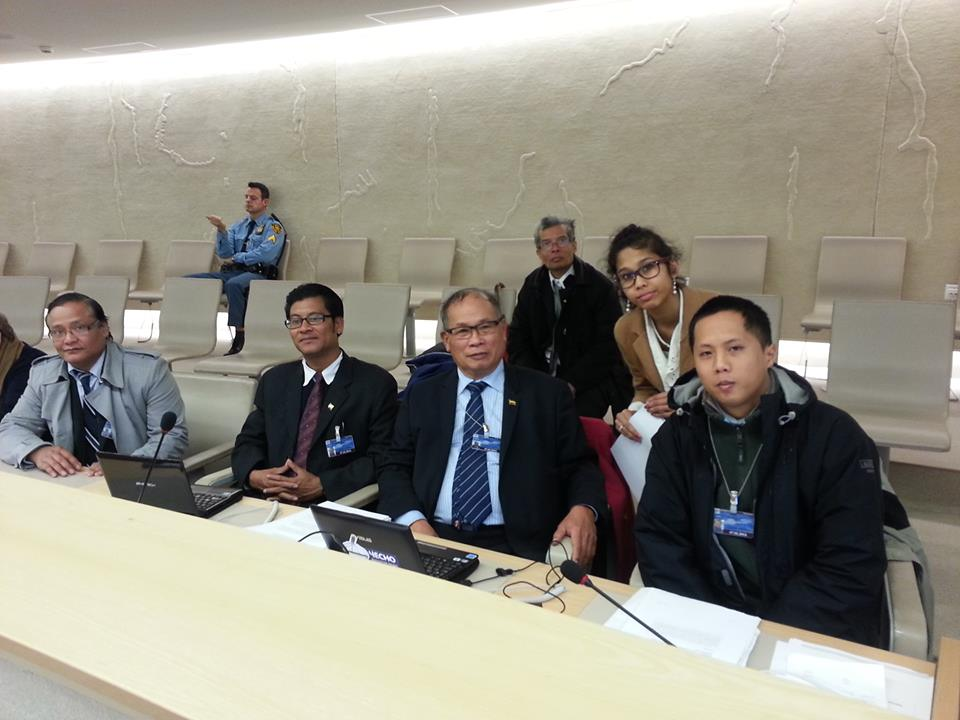