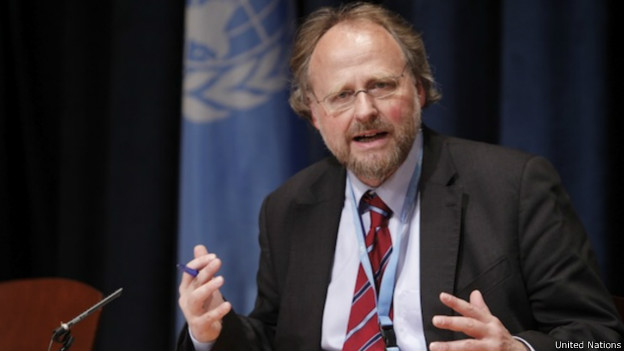 Geneva (March 11, 2015)- Special Rapporteur (SR) on Freedom of Religion or Beliefs, Heiner Bielefeldt, opened up a side event for Religious Freedom in Vietnam and The Mekong Delta, co-organized by the Khmers Kampuchea-Krom Federation (KKF). The SR gave an overview of the reality that exists for indigenous peoples and  religious minorities in Vietnam, speaking of the contrast between the surface appearance and the actual systemization of control over religious life and institutions within the country. “Religious life is only possible within certain established channels.  These channels are very narrow and religious communities have to cope with lots of difficulty,” says Mr. Heiner Bielefeldt.

Asking if there is a problem with religious freedom, the SR stated that there is a “big problem” with religious belief and freedom.  “To be fair religious  life is possible.. it is open and accessible, and people do access them,” but they do so “within the established channel.” Examples were  given of groups requiring to request for permissions beforehand to hold religious events and where failure to accept the central decisions were equated to a “rebellious spirit” and were responded by the government with police raids, destruction of house of worships and imprisonment for some people.

While Vietnam has some policies to open up for religious freedom, “harsher persecution under the criminal code” remains for groups that wishes to assert religious autonomy.

The religious life is under strict “grip of the government control ” and is used to promote patriotic values.  “People insisting on [religious] autonomy, freeing themselves from grip of government control and even infiltration.   Religion is established to also provide courses on Marxist Leninism.  It is not only control but instrumentalizing religion.”  The reality is that public  and religious life  are being monopolized by the government.

Mr. Heiner Bielefeldt concluded his participation in the side event by thanking the people who had the courage to meet with him despite the harassment and intimidation they received.  Regarding reports that were given to him by NGOs such as KKF, the Montagnard people, and other stakeholders, Heiner said, “I am inclined to say reports are credible.  I have also to say that this visit was complicated because reprisals took place even while I was there during the visit. Our sources were harassed and intimidated many of them sometimes before and after meetings.  Some people even had worse experiences including physical attacks.  This really raises issue of reprisals which is a very serious one inflicted on people that cooperate with UN mechanisms. It undermines the entire HR work of the UN.  It will be further addressed.  UN HR Council takes issue of reprisals very seriously. Thanks to very courageous people in Vietnam who do not let themselves be intimidated and they continue their work cooperating across religious lines.”

The side event was moderated by Dr. Joshua Cooper, from the Hawaii Institute for Human Rights,  and KKF representatives, Miss Thivanada Kim, and Mr. Don Lam and Ms. Sothy Kien.. 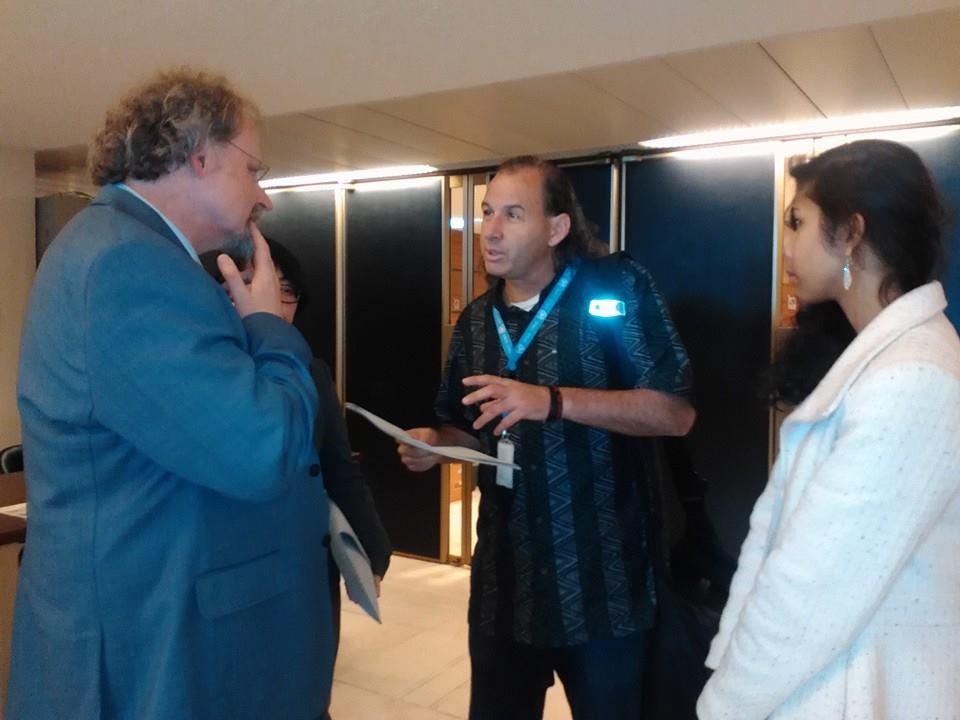 Dr. Cooper spoke about the cooperation between religious groups in coming together to prepare the reports for the SR, the persecutions of Khmer-Krom Buddhists and Degar Christians.  He spoke about instrumental role of outside human rights defenders in not only making the violations known, but also in their intervention efforts such as the case of Venerable Ly Chanda who were defrocked and tortured, but was eventually able to secure refugee status in a third country working with the UNHCR.

Sothy Kien, provided an overview of the constraint of cultural freedom faced by the Khmer-Krom people. The issue of self-identity and the threat of being labeled belonging to a “separatist” group for asserting one as being “Khmer-Krom” makes the people afraid to call themselves by how they identify themselves.  She clarified that “Krom” does not mean ‘separatism’, it simply means below or under, which refers to the historical identity the Khmer people attached to themselves when they were separated from the Cambodian kingdom.

On the topic of reprisal, KKF representatives explained the top-down structure of control imposed by the government of Vietnam on their religious institution, which prior to 1975 were self-organized and functioning autonomously. It was noted that such control clearly violates the principle of separation between state and religion which is fundamental to having true religious freedom.

On this point, KKF panelist points out the pressure placed upon temple abbots across the provinces to assume memberships with the government created PUBA (Patriotic Unified Buddhist Association), a mechanism to interfere and control Khmer-Krom’s religious life. Using these tools, the Vietnamese government monitored, control and removed religious leaders who they saw as posing a threat to their political and cultural narrative of Vietnam and its various ethnic and indigenous groups – such were the cases of Venerable Ly Nieu, and Venerable Thach Thoeun from Tra Set Temple, Kleang.

The event ended with positive notes and engaged audiences; among a few were NGO group who had for the first time found the religious and cultural situation in Vietnam, through the rapporteur’s report, “shocking”, and “eye-opening.”

KKF appreciates the effort of the Special Rapporteurs to Vietnam that made the reality of the Khmer-Krom and other persecuted groups in Vietnam known, and validate what we had reported for so long. We thank the SR on the Field of Cultural Rights, Ms. Farida Shaheed on her report in regards to culture and her recommendations to Vietnam. We would like to thank the SR on Religious Belief, Mr. Bielefeldt, for his time and comprehensive report on the actual reality of religious freedom situation today versus what appears on the surface.

While noting that severe restriction remains, and needs to be addressed, we applaud the direction that Vietnam has taken to invite UN experts, and urged continued dialogue with all shareholders to ensure that real progress are made and the rights as declared on paper in the country’s constitution are fully exercisable and enjoyed by all citizens.

And finally, we look forward to connecting with future experts and NGOs working in Vietnam to promote human rights, religious and cultural freedom, and the recognition of the Khmer Krom people as the indigenous peoples of the Mekong Delta and its surrounding regions.  The full reports of SR can be found via

http://www.ohchr.org/EN/NewsEvents/Pages/DisplayNews.aspx?NewsID=15678&LangID=E for Religious Belief and A/HRC/25/57/Add.1 – Office of the High Commissioner for Human … for Cultural Rights.