Contact:
Sereivuth Prak
P.O.Box 193
Pennsauken, NJ 08110
Phone:  562-209-1790
http://kkjsd.blogspot.com
kkbook@khmerkrom.org
We are running out of copy for this book – an update will be made when a new version of the book is available 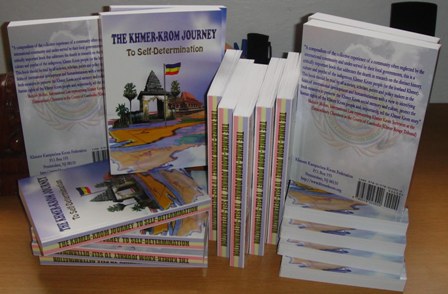 Living under the control of the Vietnamese government, the indigenous Khmer-Krom peoples have suffered tremendous human rights violations, confiscation of ancestral lands, and economic and social deprivations. The Indigenous Khmer-Krom peoples are not allowed to learn their own language and history in public schools or to freely practice their Theravada Buddhism without the interference of the Vietnamese government.

As an effort to bring awareness of the voiceless Khmer-Krom in Kampuchea-Krom to the world, the Khmers Kampuchea-Krom Federation (KKF) is proud to present this book about the Khmer-Krom, entitled “The Khmer-Krom Journey to Self-Determination”. This is the first time this subject has been presented in this level of detail in the English language.

This book contains material produced by the KKF reflecting the true accounts of the Khmer-Krom regarding their history, culture, religion, and land. This information was produce by the combined efforts of KKF contributors, living in Kampuchea-Krom and from countries around the world. This book also consists of a collection of articles and essays about the Khmer-Krom that are written by academics and Human Rights advocates.

In his review of this book, Madev Mohan, the International Law representing Khmer-Krom Survivors at Extraordinary Chambers in the Courts of Cambodia (Khmer Rouge Tribunal) wrote, “this book should be read by all activists, scholars, jurists and policy makers in the fields of international development and humanitarianism with a view to identifying fresh measures to preserve the Khmer Krom social memory and culture, protect the human rights of the Khmer Krom people and, importantly, tell the Khmer Krom story.”