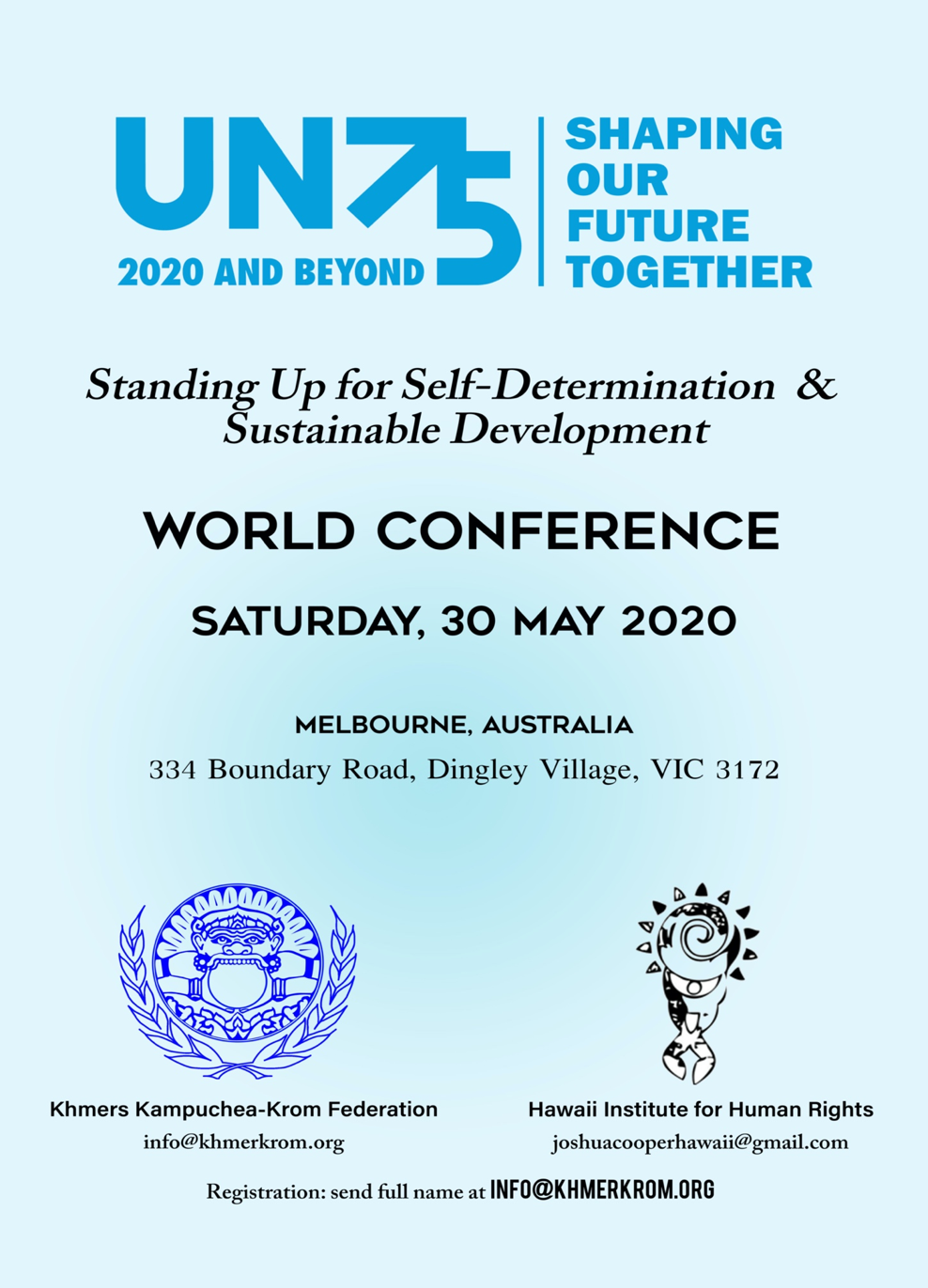 The Khmers Kampuchea-Krom Federation (KKF) together with the Hawaii Institute for Human Rights (HIIR) are organizing a one-day world conference entitled “Standing Up for Self-Determination & Sustainable Development” to honor human rights in the UN Charter on the UN’s 75th Anniversary and advocating for the “UN 75 2020 & Beyond – Shaping Our Future Together” in one of the nations that played a prominent role in the creation of the UN in Melbourne.  In 2020, multiple movements are mobilizing to protect the people being denied their fundamental freedoms and promote the well-being of our world through the Paris Agreement and 2030 Agenda.  Human Rights enshrined in the UN Charter is at the core to create World We Want beginning with ancestral wisdom of host cultures dedicated to protect our planet witnessed around the world by human rights defenders for our sacred earth.

The conference coordinates a creative and strategic conversation among the indigenous peoples, climate activists, civil society, academics, and elected public officials. The aspiration is to bring together bold visions backed up by beautiful actions by advocates, activists, authors, analysts, and academics to Shape Our Future Together. The morning session will feature panels focusing on commemorating the 75th UN Charter and safeguarding the right to self-determination that is enshrined in the UN Charter. The afternoon session will focus on the implementation of the UN Sustainable Development Goals to ensure that Leave No One Behind, especially the indigenous peoples who have traditional wisdom that can achieve the 2030 Agenda.

The conference understands, most importantly, sustainable development cannot be achieved without human rights. Human Rights is the heart of both the Paris Agreement and the 2030 Agenda. The conference will build on the decades of the achievements of the Universal Declaration of Human Rights and the more recent UN Declaration on the Rights of Indigenous Peoples with the most recent global agreements for humanity, the UN Framework Convention on Climate Change Paris Agreement and UN General Assembly 2030 Agenda of the 17 UN SDGs.

The admission to the conference is free, but donations are appreciated.

Lunch and tea/coffee break will be provided, and registration is required.

75th Anniversary of the United Nations:

Seeking Self-Determination in the 21st Century:

Freedom of Worship in the World:

Right to Freedom of Religion & Honoring Our Earth

Build a National Human Rights Movement and Beyond:

Juxtaposition of Justice in Australia, Laos, Vietnam & the United States of America

Dr. Cooper teaches advocacy at the International Training Center on Teaching Peace and Human Rights in Geneva, Switzerland as well as the University of New South Wales Diplomacy Training Program in the Asia-Pacific region and the Oxford University Training Program for Unrepresented Diplomats at the United Nations. He is the assistant to the United Nations Permanent Forum on Indigenous Issues Rapporteur and has assisted the Khmer-Krom for over a decade at the UN and the Association of Southeast Asian Nations processes for peace, justice and indigenous rights.

Up to April 2017, Mr. Prak served as the Vice President of the KKF, a position he held for 12 years. As such, was giving updated briefings about human rights violations and religious persecutions in Vietnam to international governments and institutions. He was also employed as the Administrative Aide to Councilwoman Laura Richardson at the City of Long Beach, California from 2003 to 2005. Prior to that, he served as the Acting Director, Deputy Director and a Public Relations Officer for the United Cambodian Community (UCC) from 1998 to 2003. He was also a Staff Assistant to Congressman Robert K. Dornan for ten years from 1987 to 1996. He participated in interviews by Radio Free Asia (RFA) and the Voice of America (VOA) which were broadcasted worldwide regarding the situation in the Mekong River Delta.

Dominic Nardi is a Policy analyst at the US commission for international religious freedom focusing on China, Indonesia and Vietnam. Prior to joining USCIRF in 2018, Dr. Nardi was finishing his dissertation research on the Indonesia constitutional court. He has extensive experience living and conducting academic research in Asia as well as working as a consultation for USAID-funded projects in Indonesia and Burma.

Mr. Robertson is currently the Deputy Director of Human Rights Watch’s Asia division. Prior to joining the organization, he worked for more than a decade on human rights in Southeast Asia. As a program manager of the United Nations Inter-Agency Project on Human Trafficking (UNIAP), he oversaw the successful negotiations of the first regional intergovernmental agreement on human trafficking in the greater Mekong sub-region. Before that, he led the Mainland Southeast Asia office of the American Federation of Labor and Congress of Industrial Organization’s (AFL-CIO) Solidarity Center, the largest United States-based international worker rights organization.

Member of Legislative Assembly of Victoria

Member of Parliament of Australia