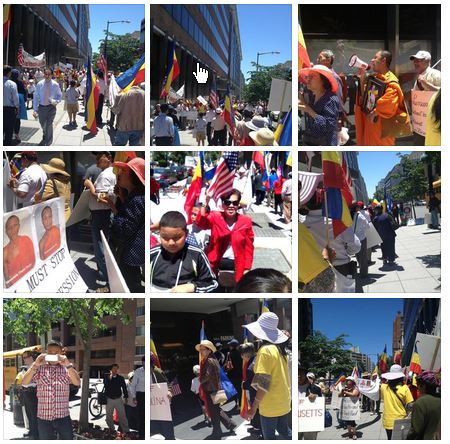 Today, we gather in front of the Vietnamese Embassies in Washington DC (United States), in Ottawa (Canada), in Paris (France), in Canberra (Australia), in Phnom Penh (Cambodia) and elsewhere to protest the recent human rights and religious persecution of our Khmer-Krom Buddhist Monks from Prey Chop Temple and Ta Set Temple as well as several Khmer-Krom Buddhist followers by the Vietnamese government. 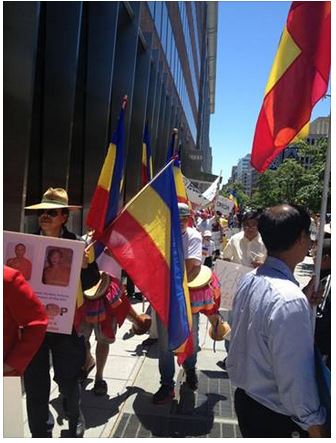 We are here to DEMAND Vietnam stop prosecuting our Khmer-Krom Monks for exercising for their rights to express their opinions.

Vietnam often boasts at the international arena that it respects the rights of all people living within its borders but recent events tell a different disturbing tale especially with its treatment of the indigenous Khmer-Krom peoples.

More than a hundred Vietnamese police and local authority representatives then headed to Ta Set temple and tried to defrock Abbot Lieu Ny and Venerable Thach Thuol. With the help of 300 followers who believed in the monks’ innocence, they were unsuccessful. Abbot Lieu Ny, Venerable Thach Thuol, Tra Tha and Thach Phum Rich were captured on May 20th 2013. Their conditions and whereabouts remains unknown. We greatly fear for their safety.

On behalf of our defenseless Buddhist monks and people who are currently held in the custody, we ask Vietnam to release Abbot Lieu Ny and Venerable Thach Thuol immediately without condition on harm.

• Reaffirm and remind Vietnam that under Article 18 of the Universal Declaration of Human Rights (UDHR), our Buddhist Monks have the right to freedom of thought, conscience and religion.

• Ask Vietnam to stop violating Article 5 of the UDHR which states that No one shall be subjected to torture or to cruel, inhuman or degrading treatment or punishment.

• Remind Vietnam Article 19 of the UDHR, states that our Khmer-Krom monks have the right to freedom of opinion and expression. This right includes freedom to hold opinions without interference and to seek, receive and impart information and ideas through any media and regardless of frontiers.

• Ask Vietnam to stop using our sacred Theravada Buddhism religion and our monks as a means to extend political control over our people.

• Remind Vietnam to treat our Khmer-Krom monks with respect and dignity.

• Ask Vietnam to provide much needed medical aid and to allow Venerable Ly Chanh Da to re-ordain as a Buddhist monk and return safely to his temple.

• Ask the U.S. Secretary of State to put Vietnam back on the list of “Country of Particular Concern”

• We urgent appeal to all civic society, Foreign Embassies as well as all citizens that respect and support human rights and religious freedom to help us spread the words about the flight of our defenseless monks and civilians.

We are here because we have the right to conduct peaceful demonstration to protest the violent actions of the Vietnamese government has committed against our voiceless people. We know for a fact that if we did this in our homeland of Kampuchea-Krom, we would be prosecuted; our monks would be defrocked and imprisoned.

We are here today to remind Vietnam that Human Rights and Religious Freedom are rights, not privilege. Stop the violence against our people. Stop treating us as second class citizens. We only ask for equal, unbiased rights that guaranteed under UDHR and UNDRIP. 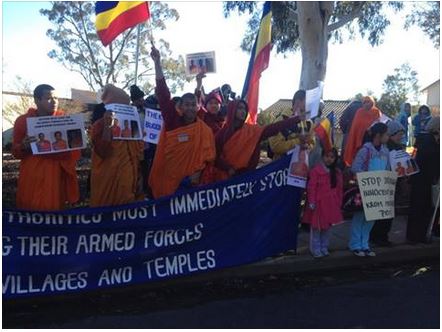 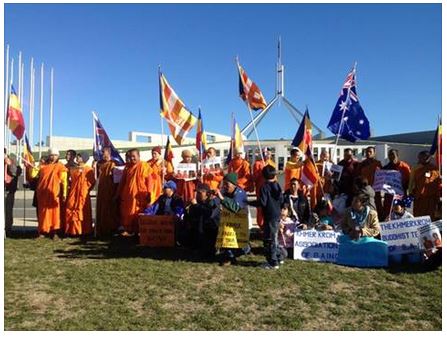