The Khmers Kampuchea-Krom Federation (KKF) is a peaceful organization representing millions of voiceless Khmer-Krom people living in the Mekong Delta and its surrounding regions of current day Vietnam as well as thousands living in exile.

KKF is a global organization ran by volunteers from around the world. Its human rights advocated activities are funded by donations from Khmer-Krom communities and the sympathizers across the continents.

The organization was first established in 1985 when the First World Convention on Khmer-Krom was held in New York City, USA. In the Fifth World Convention in Toronto, Canada in 1996, the current name of Khmers Kampuchea-Krom Federation was adopted.

The mission of KKF is, through the use of peaceful measures and international laws, to seek freedom, justice, and the right to self-determination for the Indigenous Khmer-Krom Peoples in Kampuchea-Krom (Mekong Delta region).

The President, who leads the executive committee, is responsible for daily operations of the federation.

Besides KKF Board of Directors, KKF is also led by the Presidents of Regional, Continental, and local chapters. 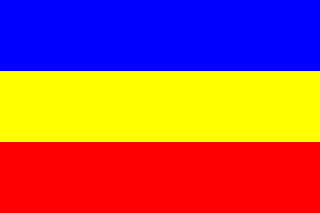 The meaning of each color is as follows:

Blue: represent for the Freedom and Democracy

Yellow: represent for the Khmer-Krom who love Peace and Justice

Red: represent for the Khmer-Krom’s Bravery and Sacrifice for the fatherland 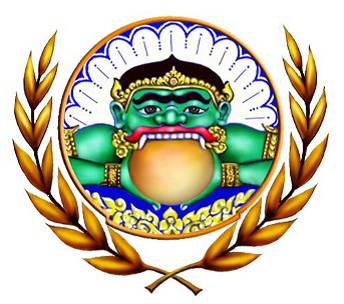 Rear Hoo is a fictitious character in the Reamker, the Khmer version of the Ramayana, which is one of the most popular mythical stories in Khmer literature.  RearHoo Chap Chan is the painting depicted a monster-like figure catching the moon (Chan in Khmer means moon). When this happens, according to Khmer folklore, we have the lunar eclipse causing darkness.

In Kampuchea-Krom, Rear Hoo Chap Chan is featured on most of the pagodas’ main chapel (Preah Vihear) and was adopted as the logo for the first Khmer-Krom Association founded by Mr. Lam Em in Khleang in 1937. Rear Hoo symbolizes the evil and the moon represents the good. Like the Lunar eclipse, the innocent and benign Khmer-Krom is falling into the darkness, caused by a brutal invader. As a law of nature, the lunar eclipse is temporary. Likewise, the Khmer-Krom people’s oppression is temporary and they will ultimately be free. The evil will ultimately be defeated.